( Collapse ) No surprise, it sucks when you get sucked out of your comfortable spot and have to retool things. And maybe disappointment here is both reflecting on and a reflection of little disappointments and uncertainties elsewhere too, so a lot of this could just be feedback loop. I dunno. It was just a thing I needed to get out of my brain.

I can't point to any one page where I got this from, because they're all pretty similar. it's just:
1/4 cup baking soda
1/4 cup arrowroot powder (some people sub corn starch)
1/3 cup coconut oil
essential oils - I use tea tree and peppermint

Mix the two dry ingredients well, making sure to take out any lumps. Cut in the coconut oil until the powders are pretty well coated. Use 3-5 drops of each essential oil as desired for scent (I'm not sure if any other properties are useful in that small quantity). Mix thoroughly. I find this amount just fits into a little 4 oz glass jar. I still need to tweak, see if I need more (likely) or less dry ingredient to coconut oil.

There's a lot that I'd like to post, rantings and ravings that I almost need to type out so I can get it out of my mind and stop obsessing. But some of that ranting I do on the trek to/from work, and some of it I just don't even want to talk about. It won't change anything, and I'll just have a more permanent reminder that, right now, I'm whatever kind of idiot I am. Frankly, I already threw out my college journals for being that kind of reminder. I don't need to create new ones.

Right. Enough babbling. Time to clean, mend, record, and see what the hell the cat is doing in the bathtub :/

So my boss gave me a freakin' big ziplock of mini chocolate chips - he got a giant box from someone else, who yadda yadda yadda, I think there might be a truck it fell off but that's just my head canon - and technically I need more chocolate in the house like the proverbial head-hole. A couple weeks ago I was looking for hot chocolate recipes because I could, and because I am underwhelmed by what passes for hot chocolate in consumable America (technically it's hot cocoa, anyway, but we don't seem to make that distinction as a rule). I haven't had hot chocolate in a Very Long Time. Turns out a decent recipe is disgustingly simple, and today I figured out how to make it portable and doable at work, so long as you have access to very hot water (we have the cafeteria coffee makers with hot water spigots). Hot chocolate for brecky? You bet! So here's the skinny, so I don't forget and so I can pay it forward.
( Collapse )

Finally! I use my origami skills for goodness and light! ...Light, get it? Christmas lights? Aaaanyway... Always fun, what one can do with scrap yarn and quick-n-dirty origami ornaments. A little double stick tape (to make the green rings; I'm out of glue) never hurts either. Not bad for a half baked idea I had yesterday afternoon. 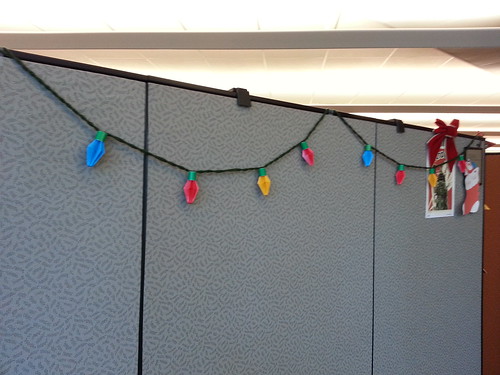 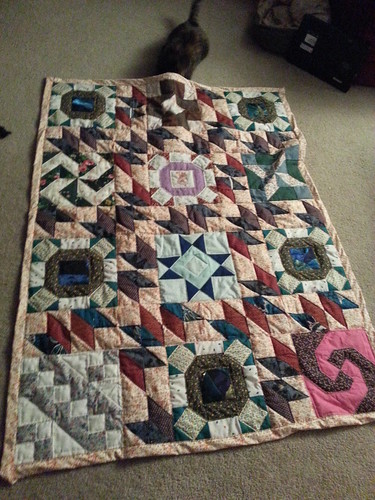 I'm posting from my phone so we'll see if this works. But other than one corner that just needs finishing work i am DONE! This is definitely a lesson in how not to make a quilt though, i gotta say. I may edit to show th back off, it is a work of wonder all its own. The stitching is uneven, the quilting is barely existent in places, there was clearly no planning or print coordination, I can't match a corner or true a square to save my life. I love it already :D 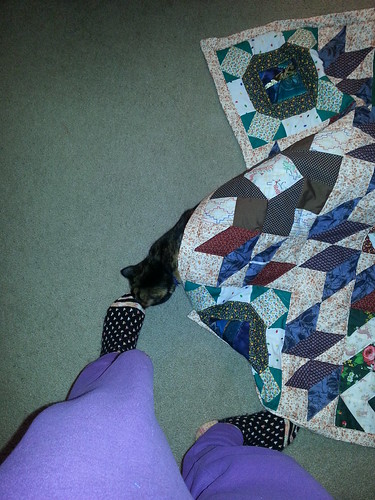 Needless to say, Thalia let me know what quilts are *really* for. Toe attack!

Edited for pictures - there's some things the mobile sites are g-awful for.

So this its the quilt that's been some twenty+ years in the making. If you're some sort of quilting purist, look away, because this is definitely function over form. 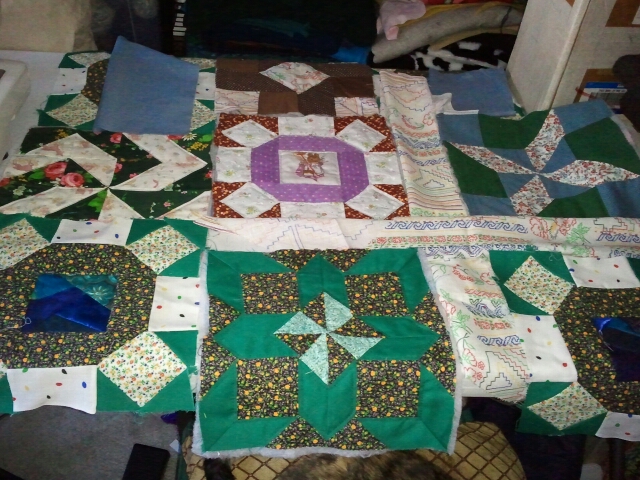 ( Collapse )
I have another row ready to add, but I'm completely out of the red/purple and blue for the long border. This isn't exactly a huge quilt, and one more row would make it actually better/more useful. Feh :( Well, I have plenty more scraps, maybe I'll find something "good enough". I haven't bought a single piece of fabric for this thing yet, I'm darned if I'm going to now. Can't wait for it to be done. I like piecing, I just can't be bothered with the while quilting thing. Not my cup o'tea.

Posted via LiveJournal app for Android.

So I finally got smart... ish, anyway. Got a plethora of peppers, zucchini and kale at the farmers market - the kale, especially, was very well priced, and the peppers are all colored which are often*very*expensive, where I got them b for a very normal pepper price. Too much veg, however, for the two of us to eat in a week or to really keep well for a time. So I finally got off my lazy butt and freezer preserved a bunch of it. Definitely an experiment. Kale got blanched for a couple minutes, but the peppers and zucchini just got cut up into useable pieces and stuck in bags - I've seen recommendations both ways on whether or not to blanch, and enough people had success with not that I'm willing to take a chance. They're all currently spread out in gallon ziplock bags in the freezer, and I'm just crossing my fingers. We'll see how things go over the next couple weeks, which should be enough to tell me if it's worth stocking up for the winter. We have the freezer space, seems shame not to use it.

What is this? This!!! This is what the end of nine yards of lace looks like. This is bobbins no longer attached to a project! This is me not having to flip the cat off my lap *again*!  This is the project I was sure I could get done by May. At least I never said what *year* I'd finish in...

I still need to trim ends, but I have to say this is the most ambitious project I've ever done. I only hope it's acceptable. Heck, I hope it's even still *wanted*! Feh *smirk* Posted via LiveJournal app for Android.

Several thoughts that have rampaged through my head over the last couple weeks. I've thought some of it before, but we're hitting critical mass, and I need to get it out. I almost posted this in Facebook, but decided this isn't the sort of thing that all my 'friends' need access to.

I'll stop complaining that insurance doesn't cover birth control when you stop insisting that erectile dysfunction drugs must be covered. You don't get to control what goes in until I get equal control over what comes out.

I won't go near the hypocrisy that is abortion vs fertility treatment, as touted by the Bible-dependent debate society. Not in public, anyway; that slope is more slippery than I'm comfortable with. Also, I'm at work and there are only so many hours in a day.

I feel fear when people in positions of power, or who are desirous of power, feel comfortable speaking *in public and on record* of restricting freedoms for subsets of the American population. Either they are so enamoured of their beliefs that they would rather shoot themselves in the proverbial foot and lose their positions, or else they are terribly certain that such statements won't cost them a thing. My fear is that it is the second thing.
Collapse